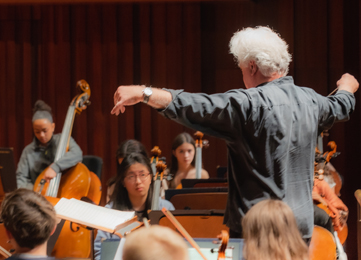 The London Schools Symphony Orchestra was founded in 1951.

For more than sixty years it has been the training ground for some of London's most talented young musicians. Not all of its players go on to be professional musicians. More than half of musicians go on to jobs unrelated to music. But for everyone who experiences it, the LSSO is a glorious and exhilarating chapter of their youth.

The orchestra's current Artistic Director, Peter Ash is a professional conductor and composer. It is the conductor's task to motivate the hundred or more individuals in the orchestra and make them play as a single team, thinking and feeling and playing together as a single team. A conductor does this in many ways. Sometimes they can be tough, demanding that everyone concentrate and give of their best. At others, they can be lighter and more humorous. Each has his their own style. But their aim is always the same: to inspire the orchestra with their vision and imagination.